On Sunday June 9th, The Austerlitz Historical Society will host a Community Tag Sale . Come look for bargains or rent a table and space and sell your own items. Tables can be rented inside the barn or on the lawn. Call 518-392-0062 to reserve a space.

A group of book lovers have begun to meet every 5 weeks in the Morey Devereaux house. The readers come together to share tasty sweets, coffee and teas as they discuss the chosen selection .Please email Anne at [email protected] if you are interested joining us.

The 2019 Calendars- The Old Houses of Austerlitz are now available and can be purchased for $10.00 dollars at the Spencertown Country Store or The Chatham Bookstore. They may also be purchased from the historical society at the Morey Devereaux House. Please call 518-392-0062 to arrange a pick up time.

On December 1st from 1-4 pm the Austerlitz Historical Society will open it’s doors and celebrate the season . The Morey Devereaux House will be decorated for the holidays with fires lit and refreshments served . As a thank you to all our members and volunteers, we will have wreath making in the barn (reservations needed for wreath making) and The Gift Shop will be open,  offering a 10% discount to all members and volunteers. All are welcome to stop by for a visit and stroll through our unique gift shop.

Jeff Harris, neighbor and member of the historical society proposed the creation of a permanent gift shop to be located in the Harvey House. Jeff a designer, offered to undertake the entire project. All revenue would go back to the historical society. From inception to its finished state, Jeff has filled the shop with a creative mix of the new and the old, including the work of local artist and crafters. A store to delight the young and not so young.

Hours: Closed for the 2019/2020 Fall and Winter season. Will be open during Autumn in Austerlitz on September 28th and on December 7th when the Morey-Devereaux will have an open house from 1-3.

You can view all of the Austerlitz Historical Society Newsletters online! Click here: https://oldausterlitz.org/membership/newsletters/

The Autumn in Austerlitz Festival is held on the Sunday before Columbus Day. This year’s 22nd Annual Festival is scheduled for Sunday October 7th, 2018 from 11am – 4pm. Rain or Shine. Admission is $7 for adults and children under 12 are free. With attendance averaging at well over 750, the event features a wide array of live demonstrations from sheep shearing to butter making, antiques, live music, entertainment for children, unique vendors, silent auction, quilt raffle and a variety of hot and cold foods to satisfy your hunger including our community soup station featuring over 6 home made soups.

Vendor space for our 2018 festival is now OPEN. If you are interested in applying to become an exhibitor for this year’s festival, please read the important information by clicking HERE. We do not accept applications by phone.

Our program is subject to change at the discretion of our Festival Committee.

Autumn in Austerlitz began in 1997 as a home grown festival to raise money for the Austerlitz Historical Society and the society’s ambitious project: to create a living history museum in the town of Austerlitz which would depict life in the 1830s, and a center for historical investigation for Austerlitz Town History.

During the summer, we start listing our Crafters, Food Vendors and Entertainers who will be participating in the year’s festival. Please check back for updates. If you’d like to see the vendors that have been at past Autumn in Austerlitz Festivals, please visit our archives page by clicking HERE

This ever-popular event features early 19th Century craft demonstrations and wares, antiques, live music and entertainment, magic act, activities for children, animals, birds of prey, sheep-shearing, plus many unique and highly talented craft vendors, artisans and a special fiber art area.  There will be blueberries galore and a blueberry pancake breakfast, in addition to a wide selection of tasty food items and baked goods.   (Please note that there is an additional charge for both adults and children for the pancake breakfast.)  [No pets, please!] 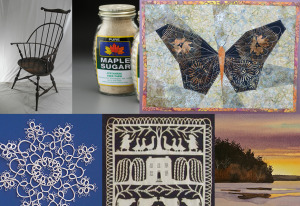 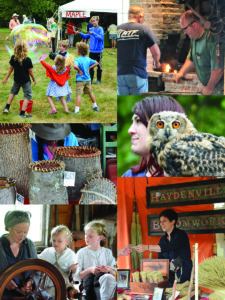 As of 7/19/18, the Artisans, Crafters, Artists and Antique Dealers participating in this year’s festival are:

AUSTERLITZ CELEBRATES ITS BICENTENNIAL ON JUNE 9-10

Established in 1818, the Town of Austerlitz will celebrate its bicentennial with a gala weekend on June 9 and 10. Jere Wrightsman, chair of the Town’s Bicentennial Committee, has announced the  schedule of events for both days, all events free of charge.

Events on Saturday, June 9, in Spencertown, will include a parade starting at 11 am on Route 7 to the new Town Hall on Route 203, dedication ceremonies at the Town Hall (noon), a free community picnic with live music at the town park (1- 4 pm), historical exhibits at St. Peter’s Church and the Spencertown Academy, and a talk on the history of Austerlitz by town historian Tom Moreland (Spencertown Academy, 4 pm.). In addition, several historic houses will be open for visits from 1 to 4 pm.

Events on Sunday, June 10, in the hamlet of Austerlitz on Route 22, will include an old car/vehicle show and free cookout, presented by the Austerlitz Fire Company (10 am – 3 pm), and historical exhibits at Old Austerlitz. The historic one-room school house, the 1852 Christian Church and historic houses will be open for visits from 10 am to 1 pm.

The new town hall in Spencertown is the building constructed as the Methodist Church in 1836. It has been acquired by the town and converted into the new town hall through generous funding provided by the Ellsworth Kelly Foundation, headed by Jack Shear.

The town hall dedication ceremonies on Saturday will also celebrate the listing of the hamlets of Austerlitz and Spencertown as historic districts on the National Register of Historic Places. The Austerlitz Historical Society spearheaded these historic district applications, which were funded by a grant from the Preservaton League of New York State.

The dedication will also feature the introduction of five new historical markers, to be placed in front of the houses of pioneering female physician Dr. Mary Clark (1845-1937) and Revolutionary War veteran and town leader Col. David Pratt (1738-1828), the house site of Peter Wheeler, an escaped slave who settled in Spencertown around 1825, the corner store building in Spencertown at Elm Street, and the Harvey Hotel/Columbia Inn on Route 22 in Austerlitz. The markers have been funded by the William G. Pomeroy Foundation.

The bicentennial weekend will also see the introduction of new local history book published by the Austerlitz Historical Society: The Old Houses of Austerlitz. The book, funded in part through a grant from Furthermore, a program of the J.M. Kaplan Fund, is the culmination of a six-year research project. It includes a history of the Austerlitz area from the 1750s to today by town historian Tom Moreland, an analysis of local architectural styles by Michael Rebic, individual histories of the 168 old houses and other buildings in the town constructed from 1760 to 1888, and short articles on such topics as one-room schoolhouses, turnpikes, huckleberry picking, slavery, and famous and infamous Austerlitz residents, such as poet Edna St. Vincent Millay (famous) and the “Austerlitz cannibal” Oscar Beckwith (infamous).

The area which is now Austerlitz was first settled in the 1750s under an 1756 deed from the Mohican Indians to 75 New England families, who formed the proprietorship of Spencers Town (12 of the deed grantees were Spencers). For many years this was a much disputed area, known as the “land of contention.” Both New York and Massachusetts Bay colonies claimed jurisdiction, and the area was within the patent granted by New York to the Van Rensselaers, who viewed the New England settlers as squatters. The disputes even led to violence, as a contingent of British soldiers attacked Spencers Town in 1766 seeking to compel the settlers to leave or submit to the Van Rensselaer claims. They did neither. Not until 1804 were these disputes put to rest, in a settlement arranged by founding father Alexander Hamilton, shortly before his death at the duel with Aaron Burr.

By the time the Town of Austerlitz was created in 1818 this was a prosperous area, intensively farmed and with active commerce in both hamlets. But in the 1840s-50s the railroads bypassed the hamlets and local farming came under increasing competition from easier fields in the west. Commerce shifted to Chatham, and farms were gradually abandoned, first in the eastern hills and later elsewhere.

By the mid-twentieth century the forests had returned and the farmers had left.  The town reached its all-time population low of 626 in 1940, only a quarter of its population in 1820 of 2,355.

But there has been a resurgence since then, today’s population standing at about 1,700. Newcomers have come, many as second homeowners or retirees, now neighbors to families with deep roots in the town, some with ancestors who came here in the 1700s. Many would agree with Edna St. Vincent Millay’s description, speaking of her beloved Steepletop in the eastern hills: “Here we are, in one of the loveliest places in the world ….” (Letter to her mother, June 22, 1925).

The 2018 “Old Houses of Austerlitz” Calendar is now available!

Get your copy at any of the following venues:

Email Newsletters You Can Trust